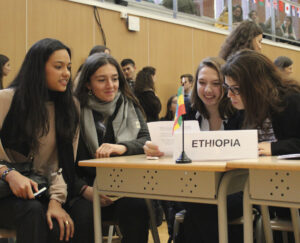 Youth Mun Madrid is a project developed by the Fundación Promoción Social for the transmission of values such as social responsibility, commitment, and solidarity among the young people of Madrid.

This project that the Foundation offers to the 9 Youth Associations of Madrid with which it collaborates, will give the opportunity to more than 50 young women of 15-18 years of having a deep and critical vision of the serious global problems that plague our world, as well as the social problems of their environment, to discuss with other young people the causes and possible solutions and to acquire a committed attitude towards them.

The Youth Mun Madrid project is based on the methodology of the United Nations models, also known as MUN (Model United Nations), which consists of simulations of the United Nations system carried out by young people, who represent to the different member countries. The MUN methodology emerged at Harvard University in 1948 and its popularity and prestige has increased day by day, reaching more than 200,000 students worldwide every year in MUN models.

In these simulations, students represent delegates from different countries and participate in debates and negotiations in which they deal with topics that correspond to the work programs of the different organs and commissions of the United Nations. Young participants, in addition to being trained on international policy issues and on the functioning of the United Nations, acquire a global vision of the world in which they develop their lives, encouraging them to know the concerns and hopes of people in different regions of the world, the way in which the work of the United Nations can improve the lives of the people who inhabit this planet and the regulatory tools and attitude necessary to strengthen international cooperation.

In addition to involving young people in the current problems of our world, participation in MUN models trains them in skills such as documentation, writing, speaking, conflict resolution, consensus building, agreements and cooperation and helps them understand that the best The way to resolve conflicts is through dialogue and negotiation, without ever resorting to violence.

It is a comprehensive non-formal education project structured in three phases: Awake, Lead and Act. These three phases guide the project so that young people, acquiring a global perspective, can develop an active and transformative attitude of the realities with which they coexist daily themselves and their fellow citizens.

The first phase, “Awake”, has as its main objective to awaken in young people a greater knowledge of global realities and the desire to lead the change they require.

It will be followed by a second phase “Lead”, whose objective is to enable young people to acquire a critical vision of these problems and be able to dialogue and negotiate with other young people possible solutions for them.

Finally, during the third phase “Act”, young people will organize and direct the simulation of a Human Rights Council for the study and dialogue of the promotion and defense of these in current situations on the international agenda.

In addition, to promote an active and transformative attitude, during this last phase each Youth Association will present a social project, designed by the young participants to respond to a social need detected in the closest environment.