Social Promotion Foundation organises the round table “Is there a penalty for maternity?” at the Instituto Cervantes in New York

This act, which took place on March 11, 2019, coincides with the presentation by the Observatory “Women and Equality “(MEI) of the Foundation of the study “Is there a penalty for maternity?”, which analyzes how Spanish women face double discrimination, due to the fact of being a woman and also being a mother, in the 63rd Commission on the Status of Women (2019) of the United Nations (CSW63). 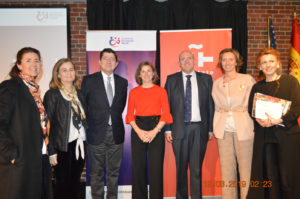 The Roundtable: Is there a “penalty” for maternity? at the Cervantes Institute in New York is a side event to the aforementioned United Nations Commission.

The presentation was made by its Director, Ignacio Olmos, and María Beamonte, General Director of the Social Promotion Foundation, who referred to the activity of the Social Promotion Foundation for more than 30 years in more than 100 projects in the Middle East, Asia , Africa and Latin America with the objective of empowering women socially and economically and promoting equal opportunities between women and men.

She pointed out that “this commitment is what has led the Foundation to the creation of the Observatory “Women and Equality “(MEI), which has the ambition of becoming a multidisciplinary network of experts in the analysis of the situation of women in the world”.

Next, Antonio Jesús Sánchez Fuentes, Director of the Research Group “Family Policies” of the Complutense University of Madrid and co-author of the Study conducted by UCM, the University of Seville and Acción Familiar, took the floor.

He explained that there is still a long way to study and to know and that national and international organizations must be made aware so that statistical data that allows us to measure the reality and impact of public policies is improved.

He stressed that the highest penalty for maternity is concentrated in the group of women with an intermediate income level, in the middle class and closed her speech with the conclusion that “women suffer a double penalty, because they are women and because they are mothers, and that is unfair and also has a very important social impact”.

Next, Eva Chamizo Llatas, Director of European Affairs of Iberdrola, focused her intervention on the need for companies to adopt conciliation measures for the entire workforce, women and men, because this generates productivity and the improvement of motivation and sense of belonging of the people.

She commented that “today there are a 42.8% of women in our Board of Directors, the Vice President of the Council is a woman, and two of the four advisory committees of the Council are chaired by women” but she expressed her rejection that this number obeyed quotas instead of the worth of these women.

She pointed out that in Iberdrola, the conciliation measure that has had the most impact has been to establish a mandatory continuous journey at work for almost all employees. It has managed to eliminate the stigmatization that is for people, women, and men, who want to reconcile personal and professional life and has reduced 80% of requests for reduction of working hours.

The conciliation measures, she emphasizes, must be for women and men so that they really generate an impact.

Ana Fernández Ardavin, Dean of the IMF Business School, said that “forced marriages, early maternity, and family care compromise the incorporation of girls in the labor market in developing countries.”

According to her, 25 million girls will never have the opportunity to access primary education in developing countries, while in Western countries, women are the majority at all levels of education except between 35 and 45 years.

Then, Blanca Narváez, General Director of the Junior Achievement Foundation, indicated that cognitive skills are at the base of the decisions made by people throughout their lives. She claimed that education is a powerful tool to eliminate stereotypes and reduce in both girls and boys the perception of ideas such as “taking care of children is less sacrificed for women than for men” or “boys are better at mathematics than girls.”

The table was moderated by Julieta de Micheo, former National Deputy and former General Director of the Ministry of Health, Social Services and Equality, who opened the debate to the attendees.

Claudia Briones, Gender Manager of the SEGIB said that “At SEGIB we work to eliminate discrimination in the economic empowerment of women in Latin America. There are still many places where the husband’s right is the one that prevails in the administration of property.”

Ana Bujaldón, President of FEDEPE, also intervened from the public and stated that “we have to consider as a society the impact of delayed maternity and that is why on March 8 we requested the increase of fiscal incentives for motherhood”.

The Director-General of the Social Promotion Foundation, María Beamonte, closed the seminar and thanked all the participants for their contributions and the Cervantes Institute of New York for their support.