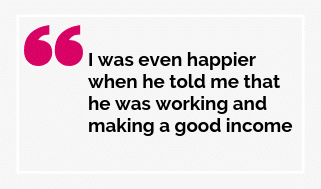 Fatima is a Social Promotion Foundation nurse at its Mental Health Clinic in Zahle.

It is the only psychiatric clinic available in the entire Bekaa Valley, a territory bordering Syria, and the first clinic of this kind that follows the strategy of the Lebanese Ministry of Health.

She works together with a medical team consisting of psychiatrists, psychologists and case managers. This team also goes to refugee settlements and supports the vulnerable host population in extreme situations (acts of violence and suicide risk), providing many inhabitants of the area who suffer from mental health problems with psychiatric and psychological support. These people suffer these problems because of the harsh circumstances they have gone through and the situation they are living.

Among this population, also, to suffer some type of mental health problem is taboo and it tends to be hidden by the relatives. Access to specialized treatment and medication is crucial, and the Social Promotion team has to overtake many difficulties.

Fatima told us about Ahmad* who was brought in to the clinic back in August 2016 by his brother-in-law after a failed suicidal attempt.

“I remember the day where this tall slender guy walked into the clinic with an open wound on his neck, dried blood on his shirt, face as white as a ghost. He seemed more dead than alive.“.

On that same day, the psychiatrist, MH nurse and case manager in collaboration with UNHCR made sure he was admitted to the psychiatric hospital 3 days from that first encounter.

During those 3 days, neither his family nor the case manager would dare leave him alone. Someone went with him even to the bathroom, they were afraid he would try to hurt himself again as he was constantly repeating that he wanted to die. He was diagnosed with Major Depressive Disorder and spent 3 months in the hospital.

Ahmad is married and has 4 beautiful children. He is a Syrian refugee who came to Lebanon in 2015 escaping the war only to find conditions worse than they expected. He could not find a job, and as described by the case manager’s notes he described his living conditions as “worse than cows.”

The family moved to an unknown location without previously informing the case manager and the centre lost touch with the case, up until July 2017 when he showed up with his wife one day at the clinic asking to see the psychiatrist. Ahmad could barely stand straight, his movement was slow and his speech was incomprehensible. His wife said that a couple of weeks back he became sad again and stopped going out of the house or taking a bath. He was barely talking to her and he was not paying attention to his children or playing with them. It took her almost a week to get him to come to the clinic with her, she was afraid he was going to hurt himself.

This time he adhered to the medication prescribed by the psychiatrist for a few months until he got better, and noticed that the medication was affecting his sexual desire. He again threw away all of his medication and refused to continue treatment. It was a group effort from the psychiatrist, the nurse, the case manager and the wife to convince him that this is going to be temporary and that things will get better.

“This was such a difficult case that I was extremely happy to see Ahmad last month when he came with his daughter for a follow-up consultation with the psychiatrist. He was playing with his daughter, joking with me and I noticed that he had gained a little bit of weight. I was even happier when he told me that he was working and making a good income. This is what makes the pressure of my job bearable, seeing the improvement in my patients” tell us Fatima.

Fatima’s work is part of the activity that Social Promotion Foundation implements with the specific objective of improving the welfare of Syrian refugees and vulnerable population through the provision of health services and psychosocial support (MHPSS) in Zahle (Bekaa Valley).

The Foundation is implementing this activity in the framework of the Project: “Reducing Economic Barriers to Accessing Health Services in Lebanon (REBAHS Lebanon)”. For 24 months the Consortium formed by International Medical Corps UK (IMC) as a leader, with the partners Première Urgence-Aide Médicale Internationale (PU-AMI) and the Social Promotion Foundation are working to improve access to quality services in primary health care, community health and mental health services for Syrian refugees and other vulnerable populations in Beirut and Mount Lebanon, Akkar, Tripoli, Bekaa and the South in close coordination and consultation with the Lebanese Ministry of Public Health (MoPH).

The project is financed by the Directorate- General of Neighbourhood and Enlargement Negotiations (DG NEAR) of the European Commission and is based on the general objective of The European Union Regional Trust Fund in Response to the Syrian Crisis (“The MADAD Fund”) to respond to the “needs of refugees from Syria in neighbouring countries, as well as of the communities hosting the refugees and their administrations, in particular as regards to resilience and early recovery.”

*The name of the patient was made up and the image was changed in order to preserve his identity.