On April 12 and 13, a total of 68 students from 12 schools in the Community of Madrid and the Canary Islands participated in the Spanish capital in Youth MUN Madrid, a congress that simulates the UN.

On Friday, April 12, the Opening Ceremony took place in the Plenary Hall of the Cibeles Palace.

The event also welcomed as observers 140 participants among schoolchildren and families. 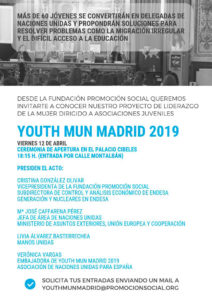 Last Friday, April 12 at 7:00 pm, the Youth MUN Madrid 2019 Opening Ceremony took place, organized by the Social Promotion Foundation and with the collaboration of Obra Social ‘la Caixa’. The Plenary Hall of the Cibeles Palace welcomed 68 young pre-university students and 140 observers who represented different delegates and ambassadors of the member states of the United Nations.

The opening session of the Act began with a few words of welcome from the Vice President of Social Promotion Foundation as the organizer of the initiative, Cristina González Olivar. María José Caffarena, Head of the United Nations Area of the Ministry of Foreign Affairs, spoke next; Livia Álvarez Basterrechea, on the occasion of the Campaign “The Woman of the 21st Century” on the 60th Anniversary of Manos Unidas; and Verónica Vargas, Ambassador of Youth MUN Madrid 2019.

Immediately afterward, the Assembly began with the speeches of 26 ambassadors representing countries such as the United States, Mexico, Germany, Somalia, Venezuela and Japan in the Human Rights and ECOSOC committees with the themes Irregular immigration and Women’s access to education in a global society.

On Saturday, April 13, the girl students continued Youth MUN Madrid at the Los Tilos school, approving different resolutions that will be sent to the UN headquarters in New York. Previously they received a session “0” by the volunteers of the Association of United Nations for Spain (ANUE) in the Diplomatic School of Madrid.

This initiative, organized by Social Promotion Foundation and with the collaboration of Obra Social ‘la Caixa’, was created with the aim of awakening interest in United Nations Models in young women of school age.

“It is the only Spanish MUN organized and directed by young adolescent women. Through this project we intend to promote the collective empowerment and the participation of women in the political, economic and social life of our country”, they explain from Social Promotion Foundation.

Unlike other MUN models, Youth MUN Madrid not only organizes the MUN conference but also offers a training program known as the Institute where young women receive training given by experts at the United Nations throughout the year.

MUN (Model United Nations) is the name that represents the global event that students of different nationalities carry out each year through conferences based on the actions of the UN. During these sessions, delegates organize committees and discuss the most relevant current issues at the United Nations.