The Women and Equality Observatory (OMEI) of the Social Promotion Foundation dedicated its day of the Seminar “Women, transforming society” to entrepreneurship, leadership, and communication of social organizations in Latin America. 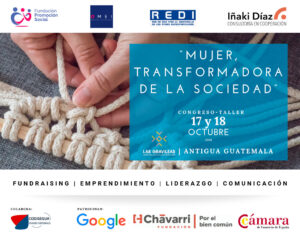 Non-governmental organizations from Guatemala, Costa Rica, Nicaragua, Dominican Republic, Colombia, Panama, and Peru, shared initiatives and experiences to combat poverty generated by the inequality of opportunities between men and women through the promotion of women’s entrepreneurship in their countries.

Fighting this gap was one of the objectives that the observatory marked with this seminar that took place on October 17 and 18 at the Women’s Training Center “Las Gravileas”, in Antigua (Guatemala).

María Beamonte, General Director of the Social Promotion Foundation, opened the day, referred to the 35 years of existence of the Foundation and its commitment to promote better living conditions for women and reduce inequalities between women and men through its projects, and highlighted the creation of the Observatory Women and Equality (OMEI).

She invited the active participation and reflection of directors and managers of Latin American NGOs, together with the experts in leadership, entrepreneurship and communication participants.

At the table dedicated to the topic of leadership, Mónica Ríos, General Secretary of the Network of NGOs for the Development of Ibero-American Countries (REDI), referred to the concept of organizational leadership, which is the one that is “styled now”, and that is characterized in that it is shared at all levels, “not only at the top” of the organization.

The OMEI Coordinator, Julieta de Micheo, said that a society is enriched “when it has both men and women, although it has to break with several stigmas.” In his opinion, the real wage gap at work is “being a mother or not,” since a woman has to face “more challenges than men: family and work.”

María Tosca, Director of Employment, Training, and Entrepreneurship of the Chamber of Commerce of Spain, and Ana Fernández Ardavin, Dean of the IMF Business School, participated in the following table dedicated to entrepreneurship.

According to María Tosca, and according to a UN report, “women have less access to men’s financing and start their businesses with 50% less funding than men do.”

For her part Ana Fernández Ardavin stated that in order to undertake, women lack self-confidence and that women must be helped to discover their potential.

Latin American NGOs, members of the NGO Network for the Development of Ibero-American Countries (REDI), also the promoter of the Seminar,  participated in a table of exchange of good practices in promoting women’s entrepreneurship in their respective countries:

The importance of communicating projects led by women

The last conference of the day, dedicated to the topic of communication, was attended by Paloma Cervilla, ABC Journalist, in her presentation is said that “what does not communicate does not exist” and stressed the importance of social networks to get to know the work that these organizations do. She insisted that it is important that all members of these groups have a presence on Facebook, Twitter, LinkedIn, and Instagram and that they use them regularly creating what is called a “personal brand”, which serves to identify a person with a specific project.

After the concluding sessions of the Seminar, it was closed.

The conference of the previous day was dedicated to publicizing the new ways to raise funds and to improve sources of funding, was carried out by Iñaki Díaz and María José Arias, of the cooperation consultant Iñaki Díaz.