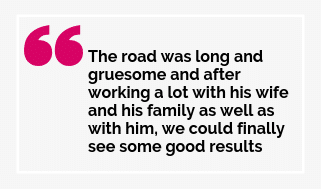 Houssam*, a 45-year-old Syrian refugee with a schizophrenia diagnosed in 2012, managed to receive psychiatric treatment at the Mental Health clinic of the Social Promotion Foundation in Zahle.

Houssam suffered the rigors of war in his country, survived his entry into a prison in Syria and, once released, managed to flee to Lebanon with his family.

During his stay in prison, about one year and a few months, he stopped taking medication, as his wife told our social worker during one of her visits to one of the refugee camps in the Bekaa Valley in Lebanon.

On the occasion of the World Mental Health Day, which is celebrated on October 10 around the world, we want to raise awareness about the situation of thousands of Syrian refugees, and vulnerable Lebanese population, who like Houssam, suffer from mental health illnesses or crises, and to mobilize efforts in their support.

Social Promotion Foundation aware of the need to undertake actions to treat mental illnesses and achieve patient recovery, directs its efforts to the provision of health services and psychosocial support (MHPSS) in its specialized clinic in Zahlé (Valle de la Bekaa) to these people in humanitarian emergencies, who are severely affected by anguish and mental illness, motivated in some cases, and aggravated in others, by the harsh experiences and difficult current circumstances. 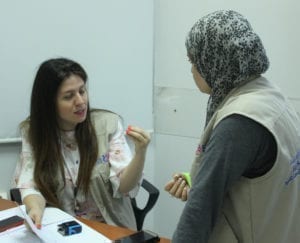 Added to this situation is the aggravating circumstance that among the population, suffering from some type of mental health problem is taboo and tends to be hidden by family members.

Houssam after interrupting his medication began to have psychotic outbreaks became aggressive with his wife and family and had hallucinations and delusions in the form of “new” religious precepts to follow that forced his wife and children to abide by, such as eating soap before pray to cleanse the soul from within.

Houssam, with a strong and obstinate character, agreed to see the psychiatrist every month, who provided the medication, and accepted visits from the social worker, but refused to take the medication.

“On one occasion, at the insistence of Dr. Psychiatrist Gisele prescribing the treatment and warning of the seriousness of not taking the pills, Houssam took the bag of pills, broke it and began to throw the medication to the floor and trample. Then he sat down and smiled, scaring us all” says one of the nurses at the clinic.

Houssam did not experience any improvement until he saw that his neighbor, who was also a patient at the clinic, was cured enough to be allowed to travel. This, in his wife’s opinion, was what made him accept the fact that he needed to change. After a long and difficult conversation with the psychiatrist, he agreed to be hospitalized for two weeks, in May 2018. He was discharged three weeks later, and since then he has not missed his appointment with the specialist and takes his medication.

“It was a great success. The road was long and frightening, but after working hard with his wife and family we could see some good results, seeing him last week with calm and willingness to collaborate made me feel proud of all the work we do,” says the nurse.

The work in the Mental Health Clinic is carried out within the framework of the project “Reducing the economic barriers to access health services in Lebanon (REBAHS Lebanon)” that it develops in consortium with its partners International Medical Corps UK (IMC) and Première Urgence-Aide Médicale Internationale (PU-AMI). The consortium works to improve access to quality services in primary health care, community health and mental health services for Syrian refugees and other vulnerable populations in Beirut and Mount Lebanon, Akkar, Tripoli, Bekaa, and the South in close coordination with the Ministry Lebanese Public Health (MoPH).

The project is funded by the General Directorate for Neighborhood and Enlargement Negotiations (DG NEAR) of the European Commission and is based on the general objective of the European Union Regional Trust Fund in Response to the Syrian Crisis (“MADAD Fund”) of respond to the “needs of Syrian refugees in neighboring countries, as well as the communities that host refugees and their administrations, particularly in terms of resilience and speedy recovery.”

*The name of the beneficiary and rights holder to whom this information refers has been changed to preserve their identity.