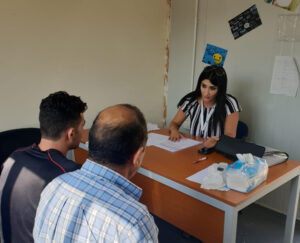 When I first started working at Social Promotion Foundation as a case manager, it was within my tasks to go outreach and deliver awareness sessions about mental health in general and raise awareness about certain diseases. I thought it was a waste of my time, a time that could be better spent following actual active cases in need of more attention. It was not until my second week on the job that I met Majid and his father Hamid, who gave me a whole different perspective on outreach and its importance. 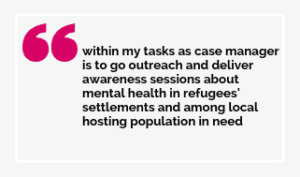 Majid is 23 years old and Hamid is 59 years old. They both live in an informal settlement in Taalabeya, a region that falls under FPS’s area of coverage in Beqaa. Hamid came to Lebanon a year ago to join his family who has been living in Lebanon for the past 5 years. Ever since he came he has been experiencing symptoms of fatigue, muscle tension and pain, and inability to sleep. He was constantly anxious and restless and attributed all of that to his lack of sleep. He visited several physicians and spent a lot of money trying in vain to solve his problem. His son, Majid, was deeply troubled and he could not figure out why or how. He was always getting into trouble, getting into fights or cowering away in a corner in the house. Majid always said that everyone was tormenting him and ridiculing him, that he felt unsafe and everyone was out there to get him. He barely slept, was anxious and hypervigilant.

When they sat in on Nada’s awareness session that day, Hamid said that the things that he was hearing felt too familiar to him and his wife, so the sought her out after the session and asked her for help.

During the awareness sessions, we not only shed the light on the different types of disorders, but also we provide a way in which we can help. We introduce and the clinic and all the different services we provide. We stress on the normalcy of mental health, and how no one is judged. We also emphasize that services are free of charge mostly and that everyone and anyone is welcome. 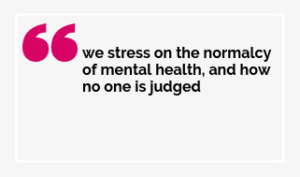 Both Hamid and Majid came to the Mental Health Clinic and were seen and assessed by Social Promotion Foundation case managers, one of them is Nada. They were then found to be in need of more than counseling, they needed psychiatric consultations. Hamid was diagnosed with GAD (general anxiety disorder), whereas Majid was diagnosed with psychosis and conduct disorder. They were given medication and followed closely by the case managers who worked a lot on their psychoeducation and managing their disease.

Two months after their first visit to the clinic, Hamid is showing great improvement, adhering to the medication. Majid is becoming more integrated into the family, his aggression has decreased tremendously and most of his symptoms have alleviated.

The work in the Mental Health Clinic is carried out within the framework of the project “Reducing the economic barriers to access health services in Lebanon (REBAHS Lebanon)” that it develops in consortium with its partners International Medical Corps UK (IMC)and Première Urgence-Aide Médicale Internationale (PU-AMI). The consortium works to improve access to quality services in primary health care, community health and mental health services for Syrian refugees and other vulnerable populations in Beirut and Mount Lebanon, Akkar, Tripoli, Bekaa, and the South in close coordination with the Ministry Lebanese Public Health (MoPH).

The project is funded by the General Directorate for Neighborhood and Enlargement Negotiations (DG NEAR) of the European Commission and is based on the general objective of the European Union Regional Trust Fund in Response to the Syrian Crisis (“MADAD Fund”) of respond to the “needs of Syrian refugees in neighboring countries, as well as the communities that host refugees and their administrations, particularly in terms of resilience and speedy recovery.”