As every year, on March 22, Social Promotion Foundation joins the celebration of World Water Day.

This year the celebration takes place in the context of the crisis caused by the coronavirus pandemic. In this sense, the United Nations appeals to the responsibility, security and solidarity of all people.

This edition focuses on the pairing of water and climate change, and how our use of water can help reduce floods, droughts, shortages and pollution, as well as combat climate change.

Water is a key component in the two agreements, financed by AECID that are currently being developed in Ethiopia and Palestine.

In Ethiopia, the effects of climate change and natural disasters, as well as internal conflicts, limit the rural population’s access to resources and capacities to cope with recurring famines. 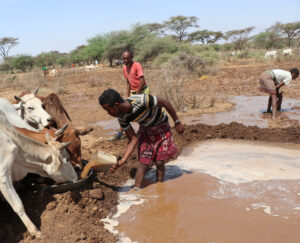 Social Promotion Foundation, in the framework of its agreement, in consortium with the NGO Rescate, and with the help of its two local partners ECC-SDCOH and Havoyoco, works in the Somali region so that the vulnerable population, and especially women, have access to drinking water, as well as to its agricultural and pastoralist farms. In addition, climate change and natural disasters are combated through the sustainable recovery of the local environment by reducing soil erosion, with physical, biological and mechanical measures.

In many areas of Ethiopia, women and girls are responsible for collecting water for the family. Many of the water points are far from the villages, so the girls have to walk many hours, making it difficult for them to attend school.

This was what was revealed in a recent activity in the Kerale Kerransa, in the South Jijiga woreda, which is very difficult to access and is located furthest from the intervention area.

We organised a group discussion in which they showed that water was the main problem for both women and men in the kebele. During the dry season, women and girls spend an average of six hours a day to fetch water and return. The water shortage is such that even children suffer accidents with the baboons to get water.

That same day we carried out a geological study with the regional government and the Water Resources engineer. A technical study was carried out and the results showed that there was a very high probability of finding water between 50 and 100 meters deep. 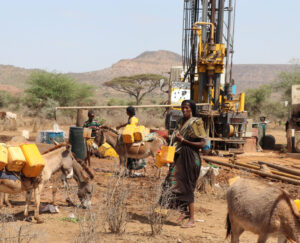 A month later, using a hired well drill, water was found 60 meters deep, to the joy of the entire community. Men quickly created natural water troughs for livestock. The installation of the entire pumping system for a water source will allow the creation of water troughs, sinks and irrigation systems. The water is already available and will allow women and girls to save 6 hours walking a day and livestock to travel shorter distances. This will allow the whole community – at least 350 families (family of 6 to 7 members on average) – to have more time available to do other tasks that will increase their income.

In Palestine, where the population experiences one of the highest levels of water scarcity in the world due to a low rainfall regime, climate change increases the pressure on water resources and the scarcity of rain.

This agreement contributes to the increased availability of access to water for rural development to the rights holders, which is a key sector to access other rights along with food and an adequate standard of living. 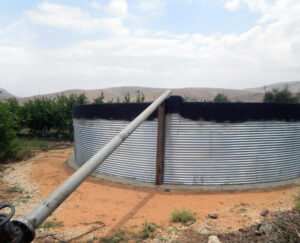 In addition, the adaptability of the rural population to climate change and to a suitable environment is promoted through access to renewable energy in terms of innovation and sustainability with the application of solar energy to agricultural techniques linked to pumping and desalination of water and the reuse of wastewater.