8 years of war in Syria: The case of Amina

March 15 marks the 8th anniversary since the beginning of the war in Syria, and many of its population are still refugees in neighboring countries, given the impossibility of returning to their homes.

Due to this, Social Promotion Foundation began in 2013 a humanitarian work in the host communities of Jordan and Lebanon, with the triple objective of saving lives, alleviating suffering and safeguarding human dignity.

During this time, their actions have not only been directed to the refugee population, but also to the poorest sectors of the local population of the host country that, negatively affected by the demographic increase, compete for basic resources.

Thus, at present, the Foundation’s humanitarian activity continues in Lebanon, through two projects funded by the General Directorate for Neighborhood and Enlargement Negotiations (DG NEAR) of the European Commission and is based on the general objective of the European Union Regional Trust Fund in Response to the Syrian Crisis (“MADAD Fund”) of responding to the “needs of Syrian refugees in neighboring countries, as well as the communities that host refugees and their administrations, particularly in terms of resilience and speedy recovery.”:

These actions are carried out in consortium with International Medical Corps UK (IMC) and Première Urgence-Aide Médicale Internationale (PU-AMI), in close coordination with the Lebanese Ministry of Public Health (MoPH).
The aim is to improve, on the one hand, access to quality services in primary health care, community health and mental health services for Syrian refugees and other vulnerable populations in Beirut and Mount Lebanon, Akkar, Tripoli, Bekaa and the South, and on the other hand, quality medical services for people with disabilities.

Specifically, Social Promotion Foundation is responsible for the provision of mental health and psychosocial support services (MHPSS) from its specialized clinic in Zahlé (Valley of the Bekaa), and the training of personnel working in the disability sector.

Amina is an example of the help that the Social Promotion Foundation provides to the vulnerable Lebanese population. This is her case: 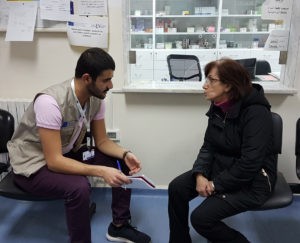 Amina is a 59 year old married Lebanese woman with three boys and one daughter living abroad. She came to Lebanon to see her parents for two months; after which two of her boys were meant to stay here for studies. During her first week here, she heard about the services that we were providing at the clinic.

Her first line of contact was with the case manager, who assessed the situation, assisted in streamlining the objectives of the case and set a care plan to put into effect.

The problematic was high stress that caused her to not be able to properly manage her thoughts and feelings. She also suffered from lack of concentration, rumination and intrusive thoughts, as well as guilt feelings in general and low self-esteem.

Moreover, marital disputes were taking place due to the fact that her husband blames her for any issue that arises at home through the use of a controlling (authoritarian) approach.

Since some of her objectives were to better her marital relationship, learn to put boundaries, to practice self-care, work on her self-esteem as well as on her relationship with important figures in her life.

Thus, part of her care plan was referring her to the psychotherapist, as well as working on the applied aspects with the case manager. We were pressured by the time limit since her flight was already booked, so the interventions had to be as effective and efficient as possible.

To organize her thoughts properly and decrease her anxiety, the psychotherapist, through teaching her mindfulness skills; and the case manager through bringing those techniques from the conceptual to the applied, worked on assisting her to ground her feelings in the present. Moreover, we have worked on bringing congruence between thoughts and feelings, therefore helping her become aware of any conflict between her mind and her emotions.

Psycho-education concerning, for example, family dynamics, was done by the case manager. The same topic was reiterated in therapy, through helping her build rapport with her children, despite distance, as well as learning to better communicate her needs to her husband via assertive training.

The progress was immediately noticeable. In her termination session, she assessed her development as having very positively affected her self-image as well as her relationships. She has grown awareness and insight and came to terms with the decisions that she had to make, lessening her anxiety and ruminations.

The case manager and the therapist put a contingency plan with her in order to insure the continued practice of self-care and assertiveness and to encourage her to build a support network where she lives.

*The patient name has been changed, in order to preserve his identity.