One more year, the Social Promotion Foundation joins the celebration of this World Refugee Day, adopting its goal of remembering the strength, courage, and perseverance of refugees and supporting all the people who have been forced to leave their homes to save their live.

The commitment of Social Promotion with refugees is currently materialized in our projects in Lebanon, a country that has welcomed more than one million people who have been forced to flee the conflict that began in Syria in 2011.

With the aim of alleviating their suffering and safeguarding their human dignity, Social Promotion Humanitarian Aid actions are directed mainly at Syrian refugees living in the settlements in the Bekaa Valley who suffer from mental health problems and/or disability.

In the provision of health services and psychosocial support in our Mental Health Clinic in Zahle, the local population in a situation of vulnerability is not excluded. 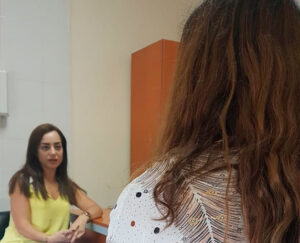 Thanks to the care they receive in the clinic, many people like Carla and their families, with the help of the professional staff of the Foundation’s clinic, can leave a situation of extreme difficulty and face the future with hope.

This humanitarian aid work is carried out within the framework of the project “Reducing the economic barriers to access health services in Lebanon (REBAHS Lebanon)” funded by the General Directorate for Neighborhood and Enlargement Negotiations (DG NEAR) of the European Commission and is based on the general objective of the European Union Regional Trust Fund in Response to the Syrian Crisis (“MADAD Fund”) of respond to the “needs of Syrian refugees in neighboring countries, as well as the communities that host refugees and their administrations, particularly in terms of resilience and speedy recovery.”

On June 5, the program “Open Europe” was broadcast on Radio Nacional de España (RNE), where the situation of refugees and the work of the Social Promotion Foundation and its mental health clinic in the Bekaa Valley were addressed. (Minute 21:50).